You are here: Home / Blog / Cajun Red Beans and Rice with Slaw for Dinner Tonight Over the weekend, we cooked up some Cajun specialties for a small dinner party we were having to celebrate Richard’s Cajun heritage. Part of the menu included a big batch of Cajun Red Beans with andouille sausage made in our slow cooker. As we had hoped, we had plenty of leftovers to enjoy for dinner tonight! We cooked up some extra rice and made Apple, Cabbage, and Fennel Slaw, which is always refreshing next to spicy food like andouille sausages.

If you don’t have a slow cooker, our recipe also explains how to use canned beans instead, but it still makes a large amount. Feel free to cut the recipe in half if you’re using canned beans and don’t need that much.

Thinking about buying a slow cooker? Check out Choosing the Best Slow Cooker. 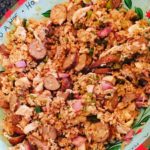